Claire,  Cromwell (2015)
Claire studied at Massey University's Conjoint Degree programme studying towards a BA (Economics) & BBS (Management). Claire has been a Rescue & Technical Services Team Civil Defence Volunteer, and was employed as an Aeronautical Engineer with Air NZ prior to becoming an the Engineering, Printing & Manufacturing Union District Organiser. Claire is now a fulltime extramural student and solo mother.
Claire is committed to improving the lives of women, and believes that her studies will give her the skills to become an effective advocate, and the knowledge to challenge constraints when seeking better outcomes for women.
Natalie, Auckland (2015)
Natalie was awarded a scholarship for her Doctorate of Clinical Psychology Programme at Massey University. Natalie has an abundance of experience as a volunteer in the community, including facilitating musical workshops for youth with disabilities, mentoring at Auckland Women’s Prison, and running activities at Auckland City Hospital’s acute metal health ward on a weekly basis. In 2015 Natalie started volunteering for TYLA (Turn Your Life Around) and helping out with the female school holiday programme for at risk Youth. In addition she is a Board member of the Auckland University Post Graduate Student Association, and is the post graduate representative on the University of Auckland Ethics committee. She has also been “International Director” for Auckland City’s Rotaract Club. Natalie has also worked overnight Youth-line counselling shifts and also for Odyssey House.
Meredith, Rotorua (2014)
Bachelor of Applied Social Science - Waiariki Institute of Technology.
Meredith is passionate about helping empower disadvantaged women within the community. Meredith’s referees report that she is committed to social justice, equality and fairness.
Stephanie, Tauranga (2014)
National Certificate in Adult Education and Training at WINTEC.
Stephanie’s long term goal is to gain a suitable qualification that will enable her to gain fulltime employment working with young women. Stephanie’s referees report that she is a highly motivated and supportive person, with a positive attitude who has helped others, even when faced with personal adversity.
Jessica, Christchurch (2013)
Bachelor of Midwifery - Christchurch Polytechnic Institute of Technology. Jessica and her husband have two children, and Jessica is a member of the local volunteer fire brigade, Jessica’s goal is to provide quality maternity services to the local rural community.
Samantha, Taranaki (2013)
Bachelor of Applied Social Sciences. Samantha has a particular interest in nutrition and exercise, and the part in which they play in both physical and mental health, and has also been actively involved in the development of the YMCA anti-bullying campaign.
Regina, Wellington (2013)
Bachelor of Nursing. After living in a refugee camp for 9 years, where she undertook some voluntary community roles, Regina arrived in New Zealand with minimal knowledge of the English language. However, Regina worked whilst studying in various tertiary programmes to improve her English language, study skills and raise her level of academic achievement to  meet the entry requirements for the Bachelor of Nursing programme.
Jacki, Hawkes Bay  (2012)
Bachelor of Nursing. Jacki is involved in many volunteer organisations when not studying or caring for her children. Jacki is an A level student who has turned her life around from being badly abused and taking many years to work through this. Her passion for making a difference with compassion really impressed us all.
Kelly, Rotorua (2012)
Bachelor of Nursing. Kelly has been a firefighter, swim coach and SPCA shelter volunteer. Kelly is also an A level students and her willingness to want to make a difference for others was obvious. 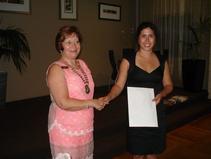 Nicole, (2009)
Bachelor of Business Studies with a double major in Human Resource and Communications Management at Massey University in Auckland.  Nicole, on becoming a solo mother of four decided she needed further education to support herself and her children.  She has been a long term volunteer for St Johns Ambulance on the North Shore  Nicole joined SI North Shore for their dinner meeting where the presentation of her award was made.
(Pictured: Joh Cogle, SI North Shore President, and Nicole).
Maria, (2009)
Bachelor of Science in Psychology and a Bachelor of Biomedical Science in Nutrition at the University of Otago. Her plan is to work with women who have psychological problems with food and nutrition. Maria has 3 children in her care. She migrated to New Zealand but was unable to find work in Translation which she had done previously.
Donna, Northland.(2009)
Nursing student. Donna has raised four children working part time and looking after extended family.  Her ambition is to be a qualified nurse helping particularly in the Maori population of Northland.  Her community is one hours drive from any Medical centre.  To complete her studies she also has to drive to Whangarei which is some distance from her home.
Karen, (2008)
Post Graduate Diploma in Educational Leadership at Waikato University. Karen teaches at a college in Tauranga and is a wife and mother of two young children. The Diploma is a prerequisite qualification for entry into a masters in Educational Leadership 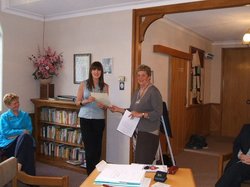 Sarah, (2008)
Medicine at Otago University. She completed her Bachelor of Science in 2004 with high grades which gave her entry into second year Medicine 2008. Her goal is to work towards helping to improve the NZ Health system. Sarah has represented NZ in Athletics.
Pictured: SI Gore presenting Sarah with her scholarship.
Vivian (2007)
MA thesis in History at Victoria University. Vivian emigrated to New Zealand from Costa Rica; she has two children. Her first language is Spanish. Over 9 years Vivian learned English and Italian and obtained a BA in History and Anthropology 2002. Honours in History 2004. Her passionate belief is that education and hard work is the way out of poverty which she remembers well as a child and teenager in Costa Rica.
Susan (2007)
Bachelor of Midwifery, Massey University Campus in Wellington. Susan has a BA in Classical Studies and Italian completed in 2004.
Susan decided on a change of career on her return to NZ. She works part-time for a breast surgeon and has been a volunteer with the Wellington Refugee and Migrant Service.
Vivian and Susan were presented with their certificate and cheque by members of Soroptimist International Club of Wellington in February 2007.
Kathi (2003)
Master of Arts degree, majoring in Development Studies. Her plans are to work for a developmental non-governmental organization in New Zealand and hopes to join Red R (a disaster relief organization) to provide fieldwork experience. Eventually she would like to work for an international organization such as the United Nations. In the meantime she intends to continue with her volunteer work with ESOL. Kathi already has experience as a volunteer with La Leche League, community Toy Library and Trade Aid.  Kathi already holds a conjoint BA/B Com degree and 2003 will be her final year of study for her Masters. In 2000 she was awarded the Senior Prize in Management and the Tuition Fees Award in 2002, both of which are based on excellence in grades. In pursuing this career path Kathi believes that it will allow her to utilize her compassion for people less fortunate than herself, particularly women, in a meaningful and valuable way, a passion she has held since childhood.

Both Kathi’s referees speak very highly of her ability as a scholar, and her integrity, reliability, self-organising and facilitation skills. She is described as lively, extremely personable, and able to communicate well across an extremely diverse range of people, irrespective of age, gender, ethnicity, culture and whether or not their first language is English. Development in the Pacific, with a special emphasis on Vanuatu and gender, has long been a research interest for Kathi. Initially this was because she is part Vanuatu and, as she knew little about her ancestry, was motivated to conduct her research on this island group. She now wishes to combine this initial interest with field and archival research, which would build on topics covered in her Developmental Studies.

Hazel (2003)
In 2002 Hazel completed her BSc(Hons) in Ecology and Conservation and in 2003 is studying for her PhD.
After completing her degree Hazel says she will be very employable in any area of research for ecology or conservation with a government or local council. Environmental issues are of great importance, not only at the national level, but also globally.

Both Hazel’s referees say she is motivated, well organized and methodical, with a mature approach to her studies. Her unusual mixture of Conservation and Statistic studies has provided Hazel with a unique collection of skills. The project she has chosen for her thesis will build on quantitative models to predict the establishment and spread of exotic weed and pest species in New Zealand, a topic of key importance to our country’s biosecurity.  After gaining NZC in Science and Chemistry in 1976, Hazel worked as a Laboratory Technician/Industrial Chemist.
Dorothy (2003)
Diploma of Teaching, Early Childhood Education, at Mt Albert Unitec, Auckland. Once qualified, she would like to continue her studies and eventually pursue a career in Educational Management.  Dorothy believes women have an important place in the workforce. After having her children she saw the need to educate herself, get back into full time work and get a life for herself. To this end she returned to school (correspondence) in the 1990s and completed her Sixth Form Certificate. One or Dorothy’s referees, a registered nurse, tells of Dorothy’s voluntary work with youth groups within their Church, She states Dorothy has been the principal assistant for younger children’s groups and goes on to say any support for Dorothy would not only benefit her and her family, but the community as a whole. Her second referee says Dorothy’s attendance and commitment to the programme has been of a high standard and she has been an enthusiastic and regular contributor to in-class discussions. 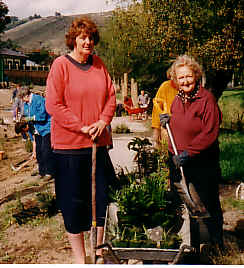